I normally only write one post a week, but today is so nice here in Central Florida that you all are getting what we here like to call a “two-fer”.  Two for one week.

The weather around here has been gorgeous the last couple of days.  A cool front came by after some rain and we’ve gotten a reprieve from the super-hot temperatures that have plagued us for the last month.  The sky is absolutely clear today and the air comfortable. 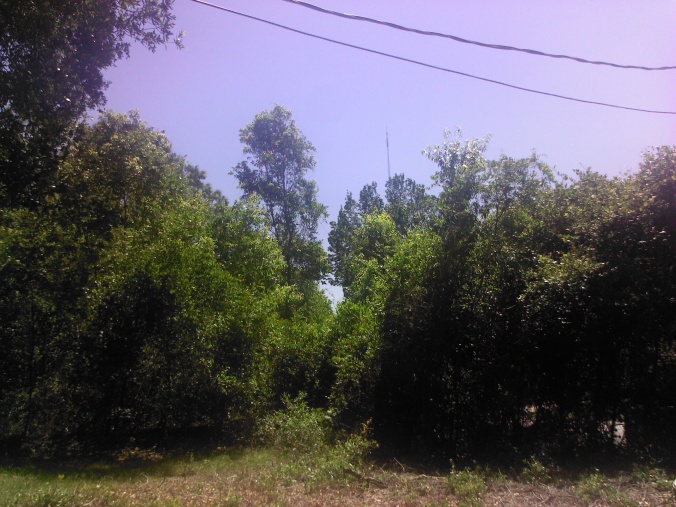 A lovely view of the scrub, trees, and sky from outside our garage this afternoon.

Our dog took some time to amuse herself by trying to chase the lizards.  To answer any questions, her name is Roxy, she is an American Bulldog/Jack Russell mix, and although she may look small in the pics, she is actually about 60-70 lbs in weight and about twice the size of a purebred Jack Russell.  She is hyper, friendly to those she knows, and loves to be rubbed. 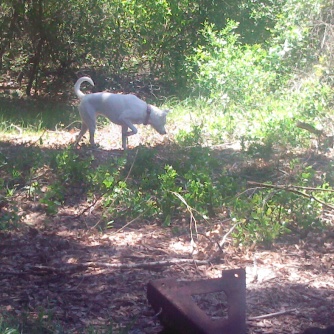 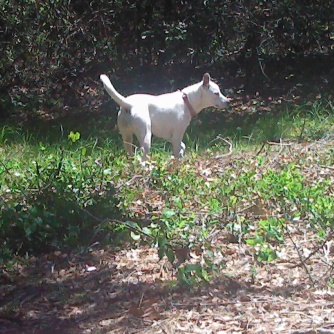 La vie en rose et violet is coming along very nicely.  And yes, I do have a piece in progress on the needles. 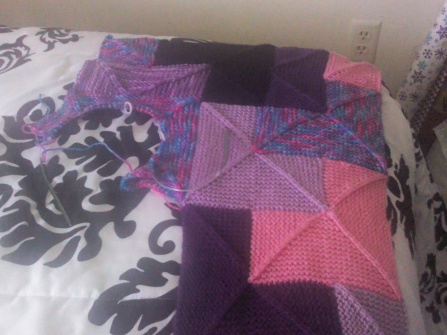 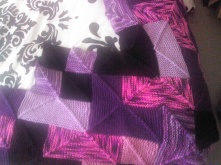 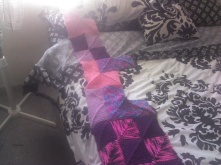 My toe is still stinging a little bit, but pretty much around the nail where it is trying to heal.  I will spare you the pics of my weathered, less-than-womanly feet.

And I am currently on my second cup of coffee for today.

We do have Netflix in our house, and recently I’ve been watching Mystery Science Theater 3000, and I’ve been alternating between episodes from the new incarnation and those from the collection from the original run, which has 20 episodes up for streaming.  My favorite so far from the Original Collection has been Manos: The Hands of Fate (although only Future War so far has bored me; probably because of Swiss actor Daniel Bernhardt, who I think was referred to in the riffing as “Jean-Claude Gosh Darn” because he does quite resemble Jean-Claude Van Damme).  My favorite episode from the new one so far is Starcrash, basically a knockoff of Star Wars.  As soon as I noticed it featured a young David Hasselhoff, I knew we were in for a camp-fest.  And it was a camp-fest indeed.

Finally, I saw my niece again briefly yesterday, when she and her mama (my brother’s girlfriend) stopped by to drop off an invitation to her first birthday party next month.  I have no clue what we’ll get her for a present.  She’s been growing like crazy and it’s not really the right time of year for baby knits anyway.  I’m thinking we’ll probably end up getting her some sort of toy for a present.

I hope you’re having a good Saturday, and I hope to write again soon!

My Most Recent Posts

On a quest to read all the things!

Philosophy is all about being curious, asking basic questions. And it can be fun!

Diary of an Aesthete

A Historian's Eye View of the World

Stories and photos from Scotland

All reviews are my honest opinion on books I've read by request or inclination. Whether purchased by me or provided by an author or a rep, all opinions are my own and I receive no compensation of any kind. My reviews may be revealing, but they will not spoil your enjoyment of the book.

a blog about my travels (so far..)

Recipes showing step by step directions with pictures and a printable recipe card.

Roxy Travels
One Chance to See the World

An Outrageous, Egregious, Preposterous, take on the legal issues of Seinfeld

Going on thirty, going back to college, working two jobs, why not start a blog too? Library Science student blogging about my college life and journey to become a librarian. I’ll also be sharing my reviews on books I’m reading in my personal life as well as for school. Happy Reading!

Keeping Up With The Penguins

Reviews For The Would-Be Booklover

Exploring What Captivates, Inspires, and Intrigues.

M-Space: The Blog Strikes Back

Books, Tea, Gaming, and the life of a geek

Adventures in life and knitting in a warm weather climate